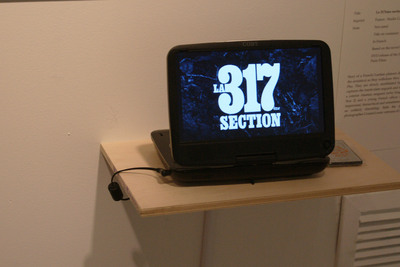 This DVD release of the 1965 French motion picture by Rome- Paris Films was played in the Special Exhibitions Gallery during the Jane Irish Exhibit. Irish selected this film from the Connelly Library's Imaginative Representations of the Vietnam War Collection.

Story of a French/Laotian platoon during May 1954 (two months before the armistice) as they withdraw thru the jungle after the fall of Dien Bien Phu. They are slowly annihilated by ambushes and disease. The film captures the inarticulate anguish and solitude of each man by focusing on a veteran Alsatian sergeant (who fought in the German army in World War 2) and a young French officer fresh from military school. Their impersonal, hierarchical and sometimes hostile relationship develops into an unlikely friendship. Both the director Shoendoerffer and the photographer Coutard were veterans of the Indochina war.