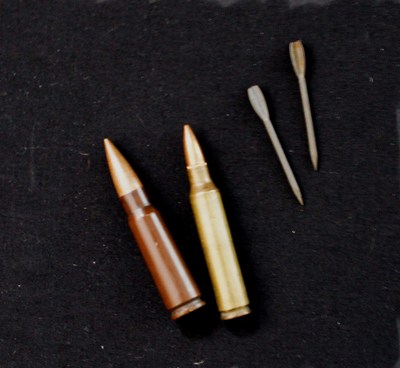 Forms of Ammunition: The bullet on the left hand side is that used in an AK-47 combat assault rifle of the Vietnam War. They were 7.62 caliber and 39 mm high velocity with full metal jacket. On the right is the cartridge of an M16A1 combat assault rifle. It is 5.56 caliber and 45 mm high velocity with full metal jacket. The two small “nails” with stabilizing wings were steel projectiles that were packed inside a 40 mm round fired from an M-79 grenade launcher. These were intended for use against personnel only and were effective in the way that shotgun shell was. These flechette rounds were terrifying to advancing infantry because of the damage to human tissue that they inflicted. These flechettes could also be used 105 mm artillery shells against massed infantry attack. Often known as “behive” rounds because of the buzzing sound that they produced upon discharge toward an enemy, they were among the most lethal weapon ammunition every designed. They are used today in armies all over the world.