Slave Auction at the South: The Weeping Time 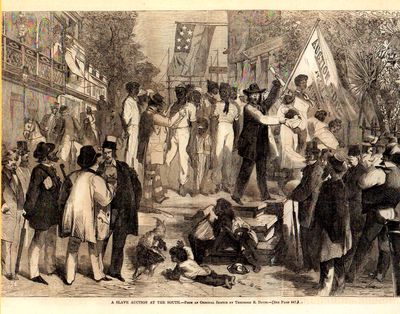 "Pierce Butler ran into financial difficulties in the late 1850’s, and he faced the threat of losing his greatest asset, his nearly five-hundred slaves. For two days in March 1859, rain fell like tears on the racetrack in Savannah, Georgia, where hundreds of slaves had been brought for auction. While the more than 200 buyers gathered in the grandstands to browse the slave catalog and make their bids, slaves awaiting auction clung to their families in the foul smelling stables that formed their temporary quarters. Over the course of the sale, friends were separated and families torn apart, scattered among various new owners in the southern United States. In all, 436 slaves were sold, making it the largest sale of human beings in the history of the United States, an event worthy of the name “the Weeping Time.” In the summer of 1861, Pierce Butler returned to “Butler Place,” adjacent to what is now La Salle, as a rich man." In, The Weeping Time, by Jason Skog