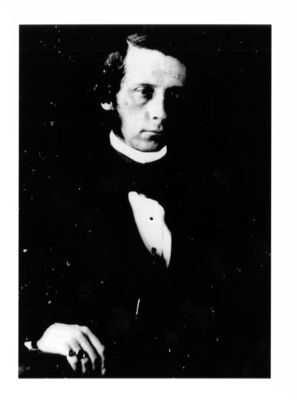 “Grandson of Pierce Butler (1744-1822), Pierce Mease Butler (born Butler Mease), inherited two plantations in the Sea Islands of Georgia from his wealthy Southern family; one on Butler Island, and another on St. Simon Island. Both lands were worked by slaves. Pierce was captivated by the English actress Fanny Kemble and induced her to marry, with famously disastrous consequences. In the winter of 1838-39, the newlyweds traveled to the family's vast holdings on the Sea Islands, where Fanny was struck by the awfulness of slavery. She eventually published an account of her impressions to much acclaim, but this was long after she and Pierce had been through a nasty divorce that left her financially weakened and without the custody of their two daughters.

The divorce did little to sober Pierce; by 1859 he had made such a wreck of his finances that he decided to sell off some of his "property." On March 2 and 3, 1859, the largest sale of human beings in the history of the United States took place on a rainy racetrack in Savannah… When the sale was complete, 429 men, women, and children had been auctioned to the highest bidder, netting more than $300,000 and restoring Pierce Butler to his accustomed affluence.

After the Civil War the Butlers tried and failed, as did other Sea Island families, to plant without slaves. In 1867 Pierce Butler, unable to coax another redemption from his inheritance, died of malaria.” --Georgia Encyclopedia