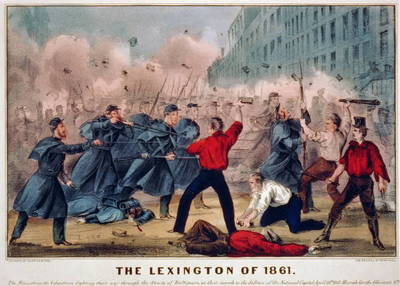 George Leisenring, a German immigrant from the Kensington/Fishtown section of Philadelphia, died in April 1861—just a few days after volunteering and before he even had been issued a uniform and a weapon. His 2nd Pennsylvania regiment (the “Washington Brigade”) was ordered to Washington, D.C., to protect the city. When the unit (together with the 6th Massachusetts) reached Baltimore, civilian sympathizers with the southern cause attacked the soldiers in what is known as the “Pratt Street Riot,” the first bloodshed of the Civil War. Leisenring was stabbed and died shortly thereafter. He is buried in Palmer Cemetery in Fishtown.

Southern sympathizers liked to refer to the “Pratt Street Riot” as the Lexington or Concord of 1861, in furtherance of their narrative of brave civilians—as in the Revolutionary War—standing up and asserting their independence against an oppressive, occupying power, which imposed its laws in defiance of “states’ rights.” In the end, Maryland (a slave state) did not join their southern neighbors in seceding from the Union.