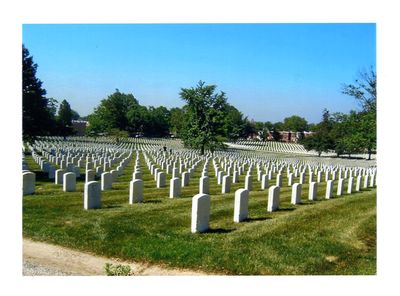 "Established in 1862, the Philadelphia National Cemetery was comprised of lots from ten different Philadelphia area cemeteries. In the late 1880s, the national cemetery was reestablished in a single location to provide a dignified and consolidated burial place for the Union soldiers who died in the Philadelphia area. Today, located roughly 22 miles north of downtown Philadelphia [and about 2 miles north of La Salle at Haines Street and Limekiln Pike], Philadelphia National Cemetery contains the remains of more than 12,000 veterans from the Civil War and later conflicts, along with spouses and dependents. About 195 of the Civil War burials are of Confederate soldiers who died in Philadelphia-area hospitals or prisoner-of-war camps."--National Park Service

Estimates of the total number of soldiers, North and South, who died in the Civil War, vary from about 620,000 to 850,000. Some recent scholarship seems to favor a number near the middle of that range: 750,000. One way to think about this staggering loss of life is to consider that the number of soldiers killed in the Civil War is roughly equivalent to the loss of American lives in all other wars in which the United States has been involved from the Revolutionary War to the present.