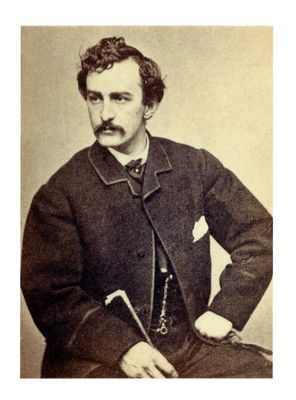 John Wilkes Booth stayed with his sister Asia Booth Clarke in Philadelphia in February 1865 and left her two letters to be opened if “anything should happen” to him. One letter—opened after Booth’s assassination of Lincoln two months later--reads, in part: “This country was formed for the white, not for the black man. And looking upon African Slavery from the same stand-point held by the noble framers of our constitution, I, for one, have ever considered it one of the greatest blessings (both for themselves and us) that God has ever bestowed upon a favored nation. Witness heretofore our wealth and power; witness their elevation and enlightenment above their race elsewhere. I have lived among it most of my life, and have seen less harsh treatment from master to man than I have beheld in the North from father to son….

I know how foolish I shall be deemed for undertaking such a step as this, where, on one side, I have many friends and everything to make me happy ... to give up all ... seems insane; but God is my judge. I love justice more than I do a country that disowns it, more than fame or wealth….

A Confederate doing duty upon his own responsibility,

Soldiers stormed Asia’s Philadelphia home at 13th and Callowhill Streets after the Lincoln assassination; she was arrested and held a dozen days in her home until her brother John Wilkes Booth was killed in Virginia.

Asia’s husband John Sleeper Clark and her brother Edwin Booth bought Philadelphia’s Walnut Street Theater in 1863 (it is still in use in 2013) and owned it for many years.