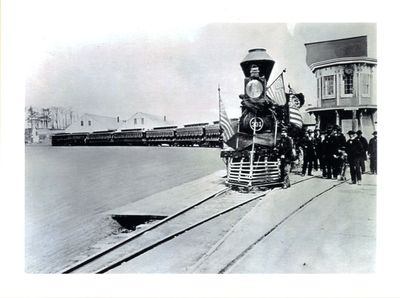 "Abraham Lincoln's Funeral Train entered Philadelphia on April 22, 1865, about two hours ahead of schedule. As in the previous cities paying their respects, cannon fire greeted the arrival of the train. Shops were closed that Saturday afternoon as huge crowds lined the tracks.

At Independence Hall in the room in which the Declaration of Independence had been signed, Lincoln would lay in state until the next day. Massive crowds of up to 500,000 people, nearly the entire population of Philadelphia, swarmed the streets in hopes of glimpsing the hearse carrying its precious cargo. The hearse was fabulous. Covered with black fringe, ornate silver work, draped in black mourning, and topped by black and white feathers, the hearse was pulled by eight black horses, the most number of the animals to yet pull any of the Lincoln hearses." --Geoff Elliott