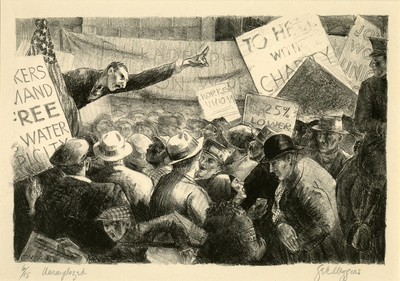 Purchased with funds provided by the Art Angels

When George Wiggins arrived in Philadelphia in 1928 to study at the Pennsylvania Academy of the Fine Arts, he could not have known that the U.S. was on the precipice of the most calamitous economic collapse since the dawn of industrialization. As Wiggins honed his artistic skills – particularly in lithography – he did so with the eye of a news reporter, having worked in journalism for several years.

In Unemployed Wiggins captures a moment amidst a labor strike by Philadelphia workers. An animated speaker forcefully expresses demands from behind an American flag, while a diverse crowd swirls beneath him, waving signs. A woman striker solicits donations under the watchful eye of a mounted cop, as a paper boy rushes to sell his papers.

This single image brings together motifs from across my Philadelphia-themed course, PHL 303: American Philosophy. Even as a new federal government was instituted in Philadelphia under a new Constitution, the city contended over what this new nation would be: black ministers and Quakers called for the end of African enslavement and discrimination; craftsmen and laborers formed the first unions; and Philadelphia workers engaged in the first organized strikes. This pattern continued up through the Great Depression.

Questions remained: In what sense are all men created equal? What do freedom and equality look like under industrial capitalism? Are there limits to free expression, to assembly, to collective action? How can government promote the general welfare? This print prompts students to reflect upon these questions, from the federalists to Franklin Delano Roosevelt.