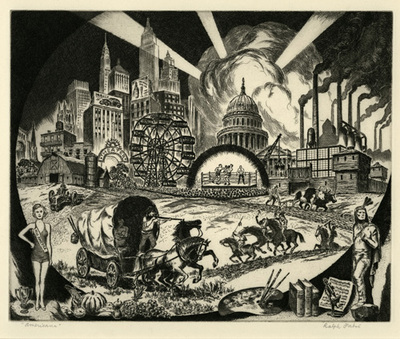 Ralph Fabri emigrated to the United States from Hungary a few years after the First World War. He created this print in 1948, not long after the end of the Second World War. Fabri had settled in New York City where he remained until his death in 1975. Over the course of his long career, he worked as a fine artist specializing in print making, as a commercial producer of advertisements and scenic design work, as a teacher, as an author of popular art instruction books, and as a promoter of U.S. government aims during WWII.

All of these experiences and influences seem to be reflected in this print. Like a number of other works by Fabri that were filled, in the words of a contemporary reviewer, with allegorical “historical pageantry,” Americana attempts to bring together in visual terms a complex topic: contemporary America. The end of WWII definitively marked the arrival of the United States as a global super power, a new role for a once small and agricultural young nation. Fabri highlights both past and present in 1948, from the search beam of air raid lights over the U.S. Capitol, to the skyscrapers of Manhattan, and the smoke stacks of American industry in the top half of the composition, while the bottom half features a horse and buggy trip through the rural past. At the very center sits a boxing ring with a match in progress. Is this the view of a champion of the American scene? Does it contain a critique, possibly influenced by the views of European intellectuals of this upstart country? Students might reflect on these questions by drawing conclusions about how the many visual elements in this print are drawn together by the composition. They might then use these insights to comment on the nature of American culture, the image of the United States in the world, or the contrast between the realities and ideals of the country, among other possible areas of inquiry.