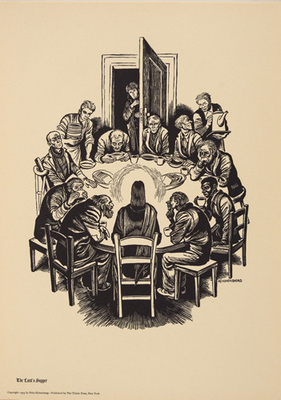 Portfolio No. 2: Eight Prints From The Drawings Appearing in "The Catholic Worker”

Fritz Eichenberg’s depiction of the Last Supper is certainly not based on Leonardo Da Vinci’s famous masterpiece. I would much rather use this print in class, however, because I suspect that the final meal Jesus shared with his apostles looked more like Eichenberg’s depiction than Da Vinci’s version. It only makes sense that folks sharing a meal would want to sit at a round table where they could enjoy each other’s company and participate in the conversation. In Da Vinci’s version, Jesus and the apostles appear to be sitting at the head table at a banquet. When you’re seated at a table like that, you can only talk to the person on either side of you. That setting is not very conducive for those hoping to participate in the first Eucharist. In addition, Eichenberg’s print is a strong reminder that Jesus did not cater to the wealthy and the powerful. He told us that the poor are blessed; he healed the lame; and he reached out to those considered sinners and unworthy. It’s not about doctrine and orthodoxy; it’s about love and how we treat our neighbor. Eichenberg understood that, and the result is a portrayal of Jesus and those he loved that challenges us to stop and think about what Christianity—and organized religion in general—should be about.

This print was created from an illustration that appeared in The Catholic Worker. When Dorothy Day and Peter Maurin founded the Catholic Worker movement in 1932 to advocate for social justice and practice the works of mercy, The Catholic Worker, houses of hospitality, and roundtable discussions were (and still are) viewed as essential to the movement.

Professor, Department of Religion and Theology