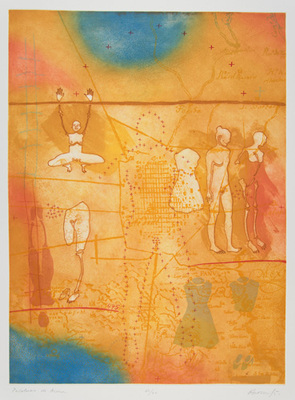 Purchased with funds from the Benjamin D. Bernstein Acquisition Fund

This etching by internationally-acclaimed Latina artist Claudia Bernardi highlights issues that are of interest to many La Salle faculty and classes. The image was inspired by the artist’s work with youth affected by the violent drug wars in Ciudad Juárez, Mexico, and her efforts to call attention to the senseless deaths in this border town. Palabras de Arena is also the name of a feminist artistic and literary collective in Ciudad Juárez, founded in 2003, which works with marginal communities, including juvenile detention centers.

Bernardi has worked extensively in the fields of human rights and social justice, particularly with Latin American refugees from war and torture. Born in Buenos Aires, she lived through the Argentine military dictatorship from 1976 to 1983. In 1984, she joined her older sister, an anthropologist, in exhuming mass graves of the ‘Disappeared’ as part of the Argentine Forensic Anthropology Team’s investigation of human right violations in Argentina, El Salvador, and Guatemala. This experience led Bernardi to focus her art praxis on the educational and therapeutic role of art in healing communities impacted by mass violence.

In 2005 Bernardi founded the Walls of Hope Art School and Open Studio in Perquin, Morazán, El Salvador, working with survivors of the massacre that took place at the nearby site of El Mozote. The “Perquin Model” of community-based art practice has been successfully implanted in other countries around the world. Walls of Hope seeks to create bridges of collaboration through public art projects, site-specific interventions and weekly art classes for people of all ages.