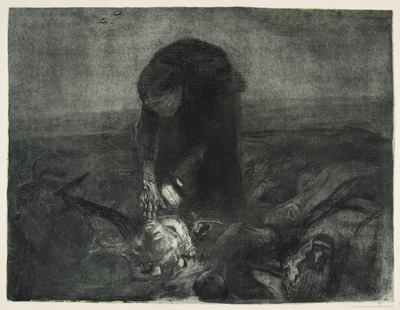 Plate 6 from The Peasant's War series

This is no typical battlefield scene. Käthe Kollwitz did not portray the glory of war, or a soldier’s heroic death -- instead we witness the heartbreaking scene of a mother searching for her dead son on a field strewn with decomposing bodies. Kollwitz first made this print in 1907, but it was reprinted in 1921, during the poverty-stricken and politically tumultuous period of post-World War I Germany. In Battlefield, Kollwitz depicts an alternate perspective of war, the experience of a grieving mother. Here, we see a mother doing the unthinkable, working her way through a field of corpses, hoping to find her loved one so she can bring him home for a proper funeral, rather than burial in a mass grave. The hardworking mother’s veined and weathered hand gently tilts the head of a young man, shining her lantern on his face, hoping to find her dead son. Kollwitz is categorized as an Expressionist artist, a modern style that emphasizes the emotional impact of their work over the technical details of realism.

Students study the biography of the artist in class, so they have a good sense of what her life as a woman artist interested in social justice was like in early 20th-century Germany. Before viewing this print, students consider and discuss the questions: What was it like to be denied Germany’s top art prize because she was a woman? Why did she focus on poverty and disease among women and children in her art? Why did she prefer prints over paintings? How did the death of her son in World War I and her grandson in World War II affect the way she viewed and depicted war? Why did Hitler put her works on his “degenerate art” list?

After studying the social/historical context, small groups of students look closely, sharpening their observation skills by providing a detailed description of what they see. They then determine how Kollwitz used certain elements like light and dark, etched lines, and perspective to help create the emotional “punch” of the Expressionist style. This exercise allows students to improve observation skills, think critically, and demonstrate visual literacy by explaining how Kollwitz managed to communicate issues of gender, poverty, and politics in early 20th-century Germany through one powerful work of art.