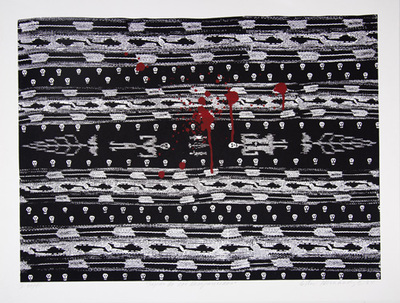 Purchased with funds provided by the Art Angels

San Francisco-based artist Ester Hernandez is best known for her paintings, pastels and prints of Chicana and Latina women. She was born and raised in California’s San Joaquin Valley to a Mexican/Yaqui farm worker family. During the 1970s, she graduated from the University of California at Berkeley and was involved with Las Mujeres Muralistas, an influential Latina women mural arts collective based in the San Francisco Mission District. Her work has expressed a consistent commitment to political activism and an interest in social, political, ecological and spiritual themes.

With Tejido de los Desaparecidos (Weaving of the Disappeared), Hernandez creates an abstract composition that replicates a Guatemalan rebozo (shawl) design. The artist made this print after visiting Guatemala during the early 1980s as a comment on the long-running civil war, which led to the genocide of many indigenous Mayan people. It is estimated that over 200,000 Mayan people were killed or "disappeared" over the course of the war.

This was one of the artworks examined by students in Spanish 301: Advanced Conversation during a class visit to the Art Museum. The students were interested and engaged as they gradually deciphered the political references in this abstract print. They also talked about how the print related to what they were learning in the course. One student noted that the print captured her attention because at first, it simply looked like a black and white textile, but she quickly noticed it was much more. Upon closer inspection, she realized the white areas were helicopters and skeletons, and the red splatters represented blood. She said the piece made her empathize with the artist because themes of loss and longing are universal.