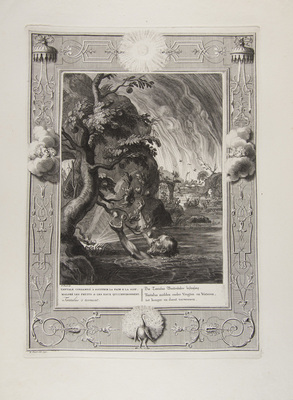 Tantalus’s Torment, from The Temple of the Muses, 1733

This beautiful 18th-century etching depicts the Greek myth of Tantalus. As the son of Zeus and the nymph Plouto, Tantalus was allowed to sit at the table with the Gods on Mount Olympus. While at the table, he stole ambrosia and nectar, food of the Gods, with the intention of taking it back to his people, so that they could become immortal. Additionally he revealed to mortals the divine secrets he had learned while on Olympus. In order to test the Gods’ powers of observation, he killed his son, Pelops, cut him into pieces and served him to the Gods as food. All of the Gods realized the deception and refused to partake in the meal with the exception of Demeter, who was so distracted by Hades’ abduction of her daughter that she took a bite of his shoulder. Zeus ordered the Fate, Clotho, to resuscitate the boy, and the missing part of his shoulder was replaced by an ivory piece Hephaestus made. For his abuse of divine favor, Tantalus was expelled from Olympus and when he died he was condemned to live eternity in the underworld. There he stood in a pool of water, which receded when he bent over to drink, and above him was a tree laden with fruit, which eluded his grasp when he reached up to pick one. From this myth, we derive the verb “to tantalize” which means to torment or tease someone while never sating his or her desire.

This etching was one of several pieces that my literature course, LIT 250: Feast or Famine: Food in our Culture, viewed during their visit to the Art Museum. The students were treated to a guided tour hosted by Miranda Clark-Binder of several cultural artifacts that reflected the duality of abundance or absence. The visit initiated our course unit on the consideration of food as an artistic expression, which was supplemented with works of literature and film.

Professor and Chair, Department of Global Languages, Literatures, and Perspectives