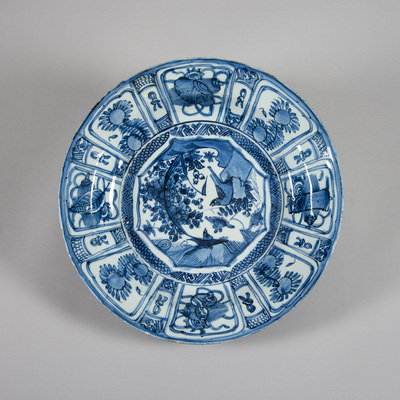 In many ways, the Ming Dynasty (1368-1644) may be said to represent the highest stage of Chinese porcelain artistry and craftsmanship. The distinctive cobalt blue coloring came as a result of trade with Persia, resumed after the turn of the 15th century. As an important part of Chinese and, more widely, East Asian material culture, this object is useful for teaching students about the Ming culture, the region, and the development of global trade networks. Ming porcelain, unlike earlier Chinese wares, often carried a variety of decorative floral and nature motifs, as well as Tibetan Buddhist symbols such as the scroll on this charger, indicative of a renewed interest in Buddhism in China at this time. With trade opening up between China and the European maritime states of Portugal, Spain, Holland and, later, England and France, Ming porcelain became one of the largest and most lucrative of world commodities. The isolation of Japan and Korea by the 1630s assured a Chinese monopoly on its production, and prompted ceramicists in other countries to try to discover the formula.

Thus one instructive painting for comparative purposes is Still Life with Fruit, by the Dutch artist Johannes Hannot (1633-84), displayed in the 17th Century Gallery (here). Toward the back of the table laden with wine and fruit is what appears to be another Ming charger—though it may also be a Japanese copy or a Dutch attempt at duplicating the Chinese product called Delftware, after the city that pioneered such copies. Even though Europeans ultimately discovered the secrets of porcelain, the Chinese varieties, often “export porcelain” shipped abroad in huge quantities, remained the standard of quality, and were known ever after as “china.”