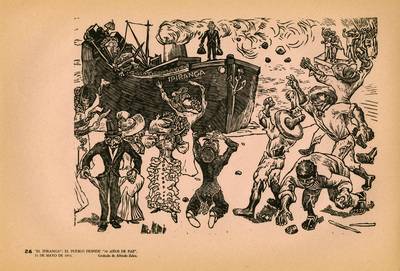 This collection of prints deals with the dictatorship of Porfirio Diaz (1876-1911) and with the Mexican Revolution (1910-1920). The prints were made by the Taller de Gráfica Popular (People’s Graphic Workshop), a collective of artists who propagated the creation of sociopolitical art in Mexico. Just as the Muralist Movement did, this collective promulgated the same post-revolutionary idealism. By using wood and linoleum blocks to print on stock paper, the cost of production was reduced which enabled affordability to the public they targeted. Since the majority of their audience had little to no education, these prints had to use bold representations to convey their meaning. The majority of the prints express the new liberal ideas and denounce social injustices of the times including the abuse of the peasants, the lack of civil rights, the inequities of land distribution, and the continuous imperialistic agenda of foreign countries. These prints served a didactic function as they portrayed historical, social, and political events for the illiterate public.

In BLS 639: Advanced Spanish Grammar and Syntax, we were able to incorporate the Art Museum experience in a different way. In this course, there is an introduction to translation as well as the study of written skills. The class project consisted of the assignation of various etchings to each student, who had to use the skills learned in class to translate the descriptions of the prints written by Alberto Morales Jimenez. The project provided the students with an experience that they would soon face in the work force, which they could include in their portfolio, as well as counted as publications on their resumes. The project was also helpful to the Art Museum in providing English language translations of original Spanish texts.

Professor and Chair, Department of Global Languages, Literatures, and Perspectives