Belfield in the Civil War Era 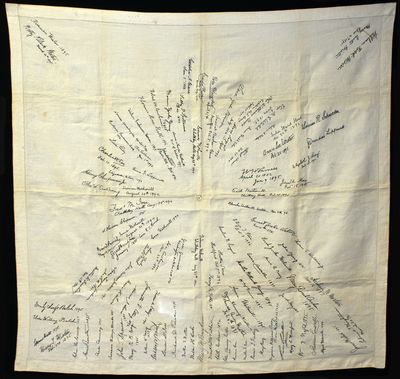 This 35” square white cotton table scarf gives some idea of the importance of the Belfield property (now owned by La Salle and housing the President’s office) in Philadelphia society and national circles. The Wister Family used this table scarf from about 1893 to 1903 as a kind of guest book for Belfield Mansion. The visitors signed the cloth in pencil and then one of the family members beautifully embroidered those signatures for posterity. A few penciled signatures remain unembroidered, and the embroidery needle was inserted in one hem about 1903 and remains there to this day.

The owners of Belfield at this time were John and Sarah Tyler Boas Wister. John’s four brothers and their wives signed in the corners. John’s sixth brother (Langhorne) died in 1891, before the table scarf was in use. Many of the 110 signatories have Civil War connections, in addition to the Wister brothers who were all veterans of the War. Just a few of those people with Civil War significance are listed below:

Read a detailed paper on the signatories table scarf by La Salle student Kathryn Feld below.